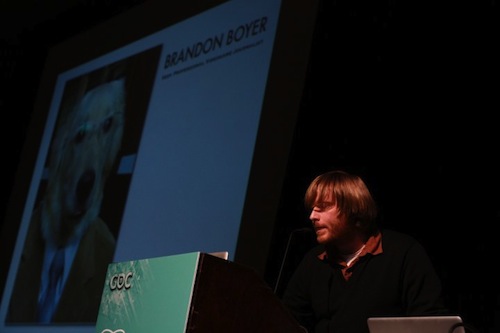 Shortly before the 2010 Game Developers Conference, Beth at Game Writers Quarterly — a newsletter from the International Game Developers Association’s Writing special interest group — asked to interview me (along with Gamasutra’s Leigh Alexander and Official Xbox Magazine’s Francesca Reyes) on the general “wot I think” subject of writing about games.

So, like, I did, and ended up divulging most all of the dirty secrets of How I Got To Where I Am Now, etc. etc., which were tantalizing enough to be used as the article’s embarrassingly over-honest pull quote.

Anyway, you can read the whole newsletter online over here, with Reyes & Alexander’s contributions included, or just follow along below for the annotated version of just my bit. Bear in mind: this is from so long ago the iPad wasn’t even open for pre-orders yet, and I genuinely hope you don’t steal my idea for embedded-Unity cover discs. I’m gonna make that a thing.

What kind of game journalism would you say you do?

I’ve gone through a number of phases since I got my start: traditional reviews and features for Edge, business reporting and interviews for Gamasutra, and most recently and unquantifiably — with Offworld and the bits I write for Boing Boing — some strange brew of art appreciation and cataloging and advocating for the accomplishments of the indie game dev scene. Maybe, more broadly, I’m trying to help champion a new games culture that doesn’t have anything to do with discarded pizza boxes in the basement hovel and ‘Bawls’ and ‘booth babes’ and all the pervasive ‘gamer demographic’ tropes corporate marketers have adopted to help sell razors and Axe Body Spray and Doritos.

How did you get your start?

It’s all been a long string of serendipitous events. After college I put in six or seven years as an office/cubicle drone in interactive/multimedia, Flash coding for just about the most uninteresting projects you could imagine. I’d just discovered Edge Magazine and recognized a.) how valuable this was as the first games writing I’d ever read that was treating me like an adult with a life-long interest in the medium, and b.) how if I ever did write about games, this was the only outlet I’d want work for, but assumed I’d have to put in a decade-long slog working my way up through writing about football franchises and bottom-rung racers.

I subverted my office drudgery by spending most of the working day browsing the Gaming Age Forums (prior to their ‘Neo’ rebrand), and kept stumbling across another anonymous user in most of the threads about the obscure/import games I loved. A friend told me he thought the guy might work for Edge, so I summoned the courage to send a polite private message to see if it was true. As it turned out, he’d been hired by Edge only a few days before, and asked who I wrote for, because I was his favorite American journalist he’d never heard of. I was obviously not one at all, but after a few more back and forths he asked if I’d ever want to contribute to Edge, and suddenly, thanks to him and the fantastic and welcoming and supportive team they had there at the time, I found myself suddenly transitioning into a new career.

With Gamasutra? I’d been following Simon Carless‘s work for a long while but never could figure out how to break the ice over the internet, so, quite literally, I waited until I was drunk and sent an unsolicited message saying I’d be happy to do some local Chicago freelance work he needed done. That worked wonders: I ended up as their news editor for two years following.

What’s the most memorable moment you’ve had as a game journalist?

This answer changes at every consecutive event or conference I go to, and it’s nearly always more about having the chance to “be human” with people whose work I admire than anything related to “professional” work. That time Keita Takahashi bear-hugged me on a couch. Smoking cigarettes and talking about Stupid Fun Club with Will Wright well before he’d left Maxis. That time I stayed up until 5am playing cards and getting completely wrecked with Lego Star Wars producer Jon Smith (Should I say that out loud? He makes family games!) and some old Edge crew, and left annoying prank voicemails on Kieron Gillen’s cell. Staying up all night basically every night of the week with the indies every time everyone’s all together. Sneaking into the suite party at my first GDC by telling the aged and oblivious doorman that the now-editor of a UK games mag was Peter Molyneux, and challenging Seamus Blackley to a Guitar Hero duel once inside.

But the moment that’s had the most lasting impact, because it was one of my very first, was staying up until 1am so I could wake up Alexey Pajitnov in Moscow and talk to him for two hours about his life with Tetris, and spending the first ten minutes in silence listening to his early morning smoker’s cough and his answering the door to receive packages. I was so green and nervous I was shivering, and was so quietly in awe of what was happening that he kept politely checking to make sure I was still on the line.

Are we even still using that term? Either way, I’m a big believer in and huge fan of doing more experiential/experimental writing about games, if that’s what the label still implies. Mathew Kumar’s debut zine ‘exp.‘ has some wonderful stuff in it, diaries written “from inside games” like Dwarf Fortress and Sims are all a thrill when done right, Julian Dibbell’s My Tiny Life, dearly departed David Sudnow’s amazingly pioneering Pilgrim In The Microworld, the peculiar angles that Clive Thompson always manages to cut through the industry at — it’s all fantastically necessary to understand Just What’s Happening Here.

What do you feel is the current state of game journalism?

Like every other form of journalism, and as you’ve no doubt heard about a bajillion times if you’ve been alive in the past decade, the “professionals” are under threat by and struggling for relevance amidst the mass proliferation of personal/hobbyist writers willing and able to do it for free, and with more developers doing their own writing about their own work (or just simply channels like YouTube and GameTrailers), even “breaking news” and “professional previews” are losing value. If you believe that “reviews” are by nature subjective — and I’d argue that done right they’re not — then every single “journalist” is up against several million Jane/Joe Citizen’s Blogspot Dot Com And Their Sack Of Opinions.

What defines credibility to you?

I suppose this follows on from what I was just saying: credibility comes from adding valuable context and left-field incisiveness to otherwise cheap opinionating, or rare access to and the ability to draw out the humanity of people normally behind the screen/scenes. On a day to day basis I don’t read reviews or read about games to find out what any particular person thinks (that’s what friends are for), I read to unearth new information. That’s exactly what the people I find most credible do.

What do you feel is the importance of game journalism to the industry itself?

I hope this doesn’t sound overly cynical, but by and large (as it stands today) it primarily serves to amplify a developer’s message to a wider body of people — honestly hardly a half step away from PR work — only done right, it adds some semblance of editorial filter from the daily deluge. Done right, it should tell a reader This Is What’s Happening And This Is Why You Should Care Even If You Have No Idea What I’m Talking About. That best serves the reader as well as it obviously serves the industry.

How do print magazines and online publications compare?

This might be the most boring and over-obvious answer I give, but again, as with all other forms of struggling journalism, print allows for carefully considered insight that is almost entirely absent from fire-and-forget online work. I desperately hope — as every other media organization on Earth hopes — that new tech like the iPad can cleanly merge the two outlets, bring consumer value back to periodicals, and some gorgeous shining interactive phoenix emerges from the rubble of displaced print journos’ foreclosed homes.

Where do you see game journalism going as a field?

Well, I sincerely hope it’s that phoenix! I hope Edge or France’s Amusement mag‘s tablet version gives me a swipe-able array of screenshots to accompany every preview blurb, and that their interviews include HD footage of the nervous laughter and shy asides of all of my game design heroes. I hope my own inevitable boutique magazine in 2012 includes full “pages” of playable demos of beautiful indie games in Unity in place of cover discs. I hope that no stone goes unturned and that everybody doing honest, artful work finds the audience they deserve.

What advice do you have for someone who wants to be a game journalist?

Unlike the blog posts currently making the rounds at the time of this interview, my advice isn’t “don’t”, and it’s not even “don’t do it for the money”. It’s “develop an expertise”, it’s “find your niche and guard it like a junkyard dog”, it’s “don’t simply add to the deafening TV static of opinions”. Be smart, pay lots of attention not just to the industry and its output, but to other journalists and what you can do for them, and above all: get drunk at your computer as often as you can and cold-email everyone you’ve ever admired, because we’re all just humans, and people — more often than not — love knowing that someone’s noticed. That last bit’s certainly done the trick for me, anyway.