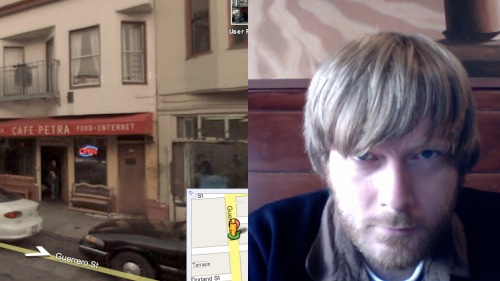 I am here, or rather, was when I started the post yesterday morning. I know I’ve been neglecting the site for too long, having moved most all my Awesome Links to my infinitely-easier-to-update and more community-oriented makeshift tumblr for now, but as you’ve no doubt sussed out (or heard me talk about ad nauseum for the past few weeks), there are major changes afoot, and so it’s probably best to get The Last Word down here.

So, first, the big news: as you will have heard, with Boing Boing’s relaunch, I will no longer be working on Offworld, and will instead be doing weekly columns on the Mother Boing (the first of which should be going up soon): round-ups of the indie/iPhone/retail games you need to be paying attention to, galleries of amazing things to lay your eyes on, and wider-ranging features that reveal something of the shape games are taking, still shining a sharp light on the stuff at the periphery and the people who make it, as was Offworld’s wont, but for a bit more generalized readership. In a sense, it’ll be quite a good thing, putting Boing Boing’s obviously sizable audience in more direct touch with indies and the rest. 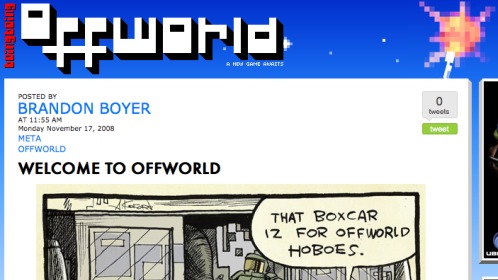 But, a site like Offworld needs to exist, and I’d always approached it since its launch last November as the site I’ve been waiting ages for someone to do, so there should be no doubt in anyone’s mind that I’m cooking up Something New basically like as I write this, and that there are a lot of exciting things that will go hand-in-hand with it.

Whether it’ll still be called Offworld or something new is irrelevant, I think: the site itself has been subsumed by the network and community of wildly intelligent, passionate game makers and game lovers that have grown around it and congregated through it (even if the commenting was too wonky to talk easily on it), and I’m not worried that we’ll find each other again quickly wherever we land.

As for the more personal rest: as of last Wednesday, I have left Austin for a bit, first to head to LA for Indiecade (which turned out to be proof positive of the collective wonder of the makers/lovers above: you should see my flickr [or Tiff’s or Greg’s or Felix’s or Eric Nakamura’s Giant Robot post] for some of the wicked times), and following that, to here — here being San Francisco — where I’ll be spending upward of a month. Or so. I haven’t exactly bought a return ticket yet, we’ll just see how that works out. The plan? Good time spent with good friends, particularly Ginger Anyhow, Steph, and Tiff, to say nothing of the billion other people I want to see while I’m here.

Don’t hesitate to contact me about anything at all on the past/present/future of my games coverage and involvement (brandon@tiger-town.com works fine!), and it’s probably easiest to see what’s happening when via twitter (@brandonnn, which probably everyone who reads this will be well acquainted with anyway). Let’s all talk more soon!

How will Dave pay his mortgage? 🙂

Glad to hear you’ve got something in the works. Offworld was definitely a breath of fresh air in the gaming world.

You were the heart and soul of Offworld, Brandon. The site was easily my favorite gaming site, and it won’t be the same without you. I can’t wait to see what you do next. =)

Less than a week after I discovered it, Offworld became my favorite games-related blog. Really looking forward to whatever you’ve got in the works.

didn’t want to see you next time we were in Austin anyway!

Offworld was THE BEST gaming blog on the net, not the least because I never read one single regurgitated press release on it. If you ever visit Toronto, my couch is your couch.

My absolute favorite gaming blog, we’ll be around to support/promote you whenever your new project is gearing up.  Let us know!

“…shining a sharp light on the stuff at the periphery and the people who make it” is exactly what made Offworld an immediate favorite. Rather than just saying the same things with new words, you brought projects and details to our attention that we wouldn’t have seen otherwise.
Thanks for that, I’m looking forward to what you do next!

I’m going to miss Offworld, but I’m looking forward to your next project.
Have fun in San Francisco. Maybe I’ll see you around.

As long as something Offworld related will exist somewhere, I guess I can live with it. I’ll be interested in seeing what your next move is.

Looking forward to your next venture. I’ll miss Oddworld, even if you never did get around to writing up Forumwarz 🙂

I mean Offworld! Must have been a brain fart. Not the fantastic PS1 game!

[…] following post was originally meant for Offworld, but, well, you know. It’s sad to see it end as a its own entity — it’s subsumed into the cluttered […]

[…] It seems, that Offworld is going to rest. Brandon Boyer, the very creator and editor of this blog wrote in his blog, that Offworld was eaten by the major relaunch of Boing Boing itself. He will keep on writing […]

[…] Were you worried about offworld? Well, Brandon says WHAT’S NEXT. […]

what is this web siet

Offworld was one of the two gaming blogs I actually felt was still worth reading (the other being Rock, Paper, Shotgun, of course). Glad to hear it’s not totally dead.

I’m sorry to see Offworld go, but I think it had been getting a bit too introspective recently with certain contributors. I look forward to seeing where you go next, because as you say – there is a need for a grown up, independant games blog. Good luck!