Not to run this space into Grizzly Bear overload, especially since I quite honestly haven’t ever given them the proper attention they’ve deserved in my own musical rotation, but since running into the video above yesterday afternoon, I’ve been as utterly disgusted as I am transfixed, and unless and until I work out exactly why that is I’m losing more sleep than normal.

First off, Grizzly Bear’s no stranger to that interplay of the grotesque and the gorgeous — see Wanderlust-directors Encyclopedia Pictura’s gloriously anatomical/biological video for their earlier single Knife, but there’s something even more deeply disquieting for all its initial mundanity about this latest Two Weeks clip, directed by Patrick Daughters (he of Feist’s moving sidewalk musical, and he who helped bring Marcel Dzama‘s drawings to life for GB-related band Department of Eagles) that won’t unseat itself from my craw. 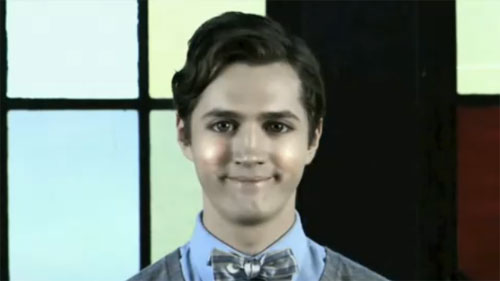 So what is it? There’s an instant uncanny-valley repulsion that takes hold as soon as their faces — which, seated left to right, go Chris Taylor, Ed Droste, Christopher Bear, and Daniel Rossen —  come into focus. Here’s my thought process, unfettered from actually google-searching to see if Daughters has already broken the video down in a million other places: first, there’s the too-prim glee-club cherubim anachronism of their get-up — they are, in their natural habitat, significantly more suitably scruffed. But are their eyes enlarged to Margaret-Keane-ly disproportion? Chris B., in particular, can’t be as doe-eyed up close and in person, but that doesn’t seem to be a trait that carries across the line. 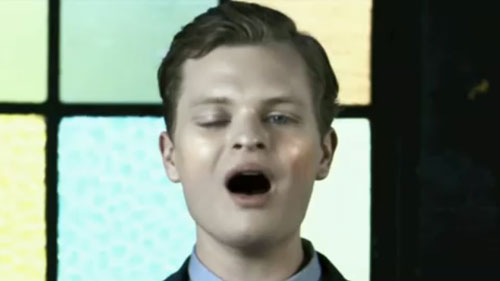 And is it just stage direction that their eyes continually blink out of sequence? On my 13th viewing last night, I sat trying to deliberately ape the right-to-left delay, which is theoretically possible, but looks too natural here. So: could it be that Daughters shot multiple takes of their faces and composited their parts back on one head? If so, he did a masterful job of seaming everything together, as I couldn’t spot even a pixel-off shift during the whole take. 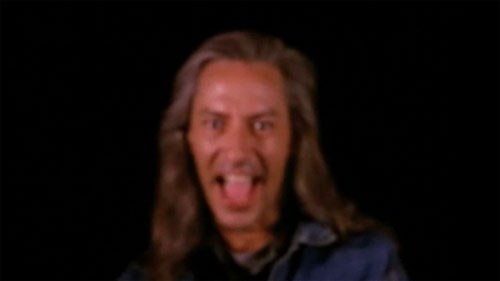 So is it, then, just the dichotomy of overcranked/normal-frame sequences put out of order, that their mouths move at human speed while their eyes take twice as long? Or simply that same unbroken gaze that made BOB’s Twin Peaks appearances so consistently horrifying? There is something subtley Lynch-ian about the video’s first half, something unsettlingly glacially paced — the unflinching OH!Mikey-ian stillness (and perhaps occasionally, ala Lynch, displayed in reverse?) — that your brain wants to work more quickly at processing, but the images won’t let it.

So what is it, then? As many times as I watch it I still can’t manage to work it out. Please, anyone with answers or theories, leave them via the comments below.

i’ve never been a huge fan of grizzly bear but “two weeks” is a great tune. the video, however, doesn’t really do much for me.