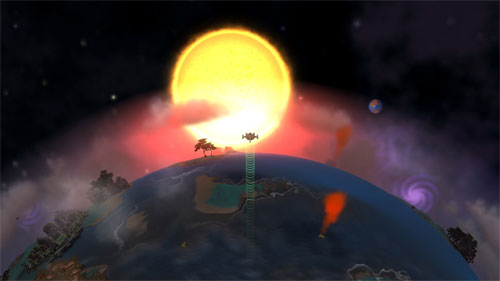 With just a week and a half before the game’s official unveiling, the UK PC gaming league of gentlemen collectively known as RockPaperShotgun have been so kind as to reprint the feature on Will Wright and the team behind Spore I originally wrote for Edge magazine in the summer of 2006.

I updated the piece with a few additional details surrounding the visit and gleaned from coverage of the game in intervening years, and a few bits on features the team was still considering at the time but have since been cut were removed. Overall I think it still holds up quite well, as I focused less on the rote details of the game (how many levels? how many guns?) and more on the people behind the game.

One of these days I’ll need to do an official update on the rest of my day out there in the Bay Area, which was taken up unofficially visiting some of Wright’s compatriots at the equivalent of J.F. Sebastian’s sentient robot filled workshop in Blade Runner.

In the meantime, you can hear the Spore team’s take on enabling players to create their own universe, whether its sci-fi convention will limit its mainstream appeal compared to The Sims’ domestic trappings, and what’s left to Sim after Wright has finished his SimEverything.