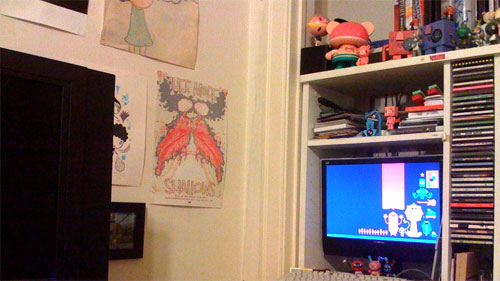 As you may have spotted, as of the end of July I am no longer the editor of Gamasutra.com, a post I kept both part and full-time for the past two years. With all due formalities, I had a great time running the news section of the site, meeting and talking with some of the games industry’s most interesting people (a selection of which can be seen below), and working with smart characters like group publisher Simon Carless and Leigh Alexander, who is as able a replacement as I could imagine.

Without my time there, I would have never had the pleasure of accepting the site’s second Webby Award in New York, which, contrary to photo evidence, I did with my eyes open, looking out at tables where the Beastie Boys and David Bowie sat staring back at me, providing one of the most surreal moments of my life so far. That was just before I walked off stage and shared an awkward handshake with former Daily Show correspondent Rob Corddry, and just after sitting at my own table eating, drinking, and generally carousing with the vice president of programming at National Public Radio. Surreal all around.

There’s not much yet to officially say about what I’ll be doing next, outside of a planned relocation from Chicago to Austin, but with this site now essentially ready for prime time (far too late), I’ll be updating with everything that both comes in and goes out of my desk. In the meantime, have a poke around at some of my older work and miscellaneous nonsense from around the web.